Menu
View cart “DavVinci Resolve Advanced Panel” has been added to your cart.

The #1 Filmmaking App on the Apple
App Store For 3 Years Running!

Can you block a scene in 30 seconds?

Neither Camera Diagrams, Shot Lists, Storyboards, or Animation by themselves give you a satisfying understanding of camera-blocking — you have to use them together. Shot Designer gives you a superior understanding of your scene, and is the ultimate Director’s creativity tool. 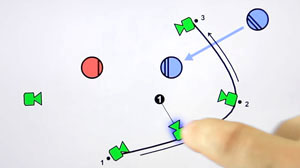 The integrated Shot List is tied into the diagram and writes itself while you work. Edit shots intuitively in the diagram, not in a spreadsheet.

Animate your characters and cameras to move around your diagram in real-time. Pre-visualize the rhythm of a scene by seeing it play out.

Animating takes literally seconds, and your scene stays flexible, so you can keep changing it.

Use Storyboards In Your Blocking

Storyboards are great for action-sequences, but blocking drama is about coverage, and that’s easier to do in a diagram.

With Shot Designer, you can bring one of the main benefits of storyboards back into your camera diagram, which is seeing what camera-angles look like.

Tip: Instead of drawing whole storyboard-sequences, just draw the keyframes that tell the story, then put it all together in the diagram. It’s freer and funner.

Use the integrated Professional Director’s Viewfinder as both a storyboard replacement, and the ultimate location-scouting tool for Directors. Build your scene blocking and try out scenes while you’re on location!

The Director’s Viewfinder supports all major camera formats, so you get a perfect record of the exact lens used for a shot.

We have lots of things planned for Shot Designer. It is in active development, and since we’re actually building this tool because we’re sick and tired of not having it, you can be sure that Shot Designer will have a long life.

Here are a few of the things we’re planning. There are many small things we’re not mentioning, and some major things are also not mentioned because they’re quite simply really good ideas.

There are no reviews yet.

Be the first to review “Shot Designer Pro” Cancel reply